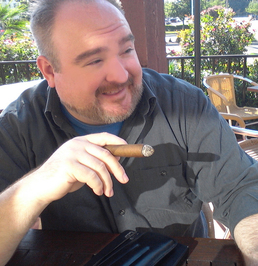 Brad McEntire
Brad works as a playwright, director, performer and improviser. He is the founder of Audacity Theatre Lab and its predecessor Audacity Productions (1999-2006). He currently serves as Artistic Director. Many of his plays were developed originally with Audacity. He is the author of several books: a collection of plays under the title Two Plays (And Some Sketches) By Brad McEntire (out-of-print), an ebook about solo theatre performance called 7 Considerations For the Solo Performer, his solo show I Brought Home a Chupacabra, Dinosaur & Robot Stop a Train and I Hate Hawk Season! a collection of comics centering around his original webcomic creation DONNIE ROCKET TOASTER-FACE.

Up until 2014, Brad performed as one half of the improv duo FUN GRIP. He is also one of a handful of pioneering performers in the sub-arcana of solo improvisation (there are only maybe half a dozen or so practitioners in the United States). He is the creator of the original solo improvisational story format Dribble Funk, a hybrid creation at the crossroads of longform improv, traditional theatre and storytelling. With development support from the Alternative Comedy Theater, Brad is the creator of the Monologue Jam, a deceptively challenging and fun storytelling format where performers stand on the stage alone to present completely improvised character monlogues. The Monologue Jam has expanded into branches in the Dallas and Austin improv cummunities.

As an actor he has appeared on stages all over the United States, including New York City as well as in London, Canada and Hong Kong. In the Dallas area, Brad has been seen on stage with several theatre companies, including The Dallas Theatre Center (365 PLAYS/365 DAYS), Our Endeavors (DAINTY SHAPES AND HAIRY APES), The Drama Club (THE GHOST SONATA), Classical Acting Company (MUCH ADO ABOUT NOTHING), The Ochre House (DREAMING ELECTRIC) and Plano Repertory (GREAT EXPECTATIONS, THE TEMPEST). He has toured extensively on the fringe festival circuit in the United States performing his repertory of original solo shows CHOP, CYRANO A-GO-GO and ROBERT'S ETERNAL GOLDFISH. He has appeared on screen in national commercials for FedEx, SuperPages, JC Penney, First Choice Energy and Piccadily Restaurants among others. Brad currently teaches Film and Theatre classes as an Adjunct Instructor at Tarrant County College. He likes cigars, camping, travel and reads voraciously. For more information, visit his website at: BradMcEntire.com